Ethiopia is a landlocked country in East Africa with a population of over 100 million — 85 percent of whom live in rural areas — making it the second-most populous country in Africa. There is, at most, one doctor per 20,000 people. Ethiopia needs qualified instructors/teachers to train less experienced healthcare workers (Kelto, 2012).

Tikur Anbessa Hospital (known as Black Lion Hospital), affiliated with Addis Ababa University’s School of Medicine, is the country’s largest general public hospital and sees around between 300,000 and 400,000 patients every year, although the exact number is not known. The hospital is the country’s main tertiary referral center, but lack many of the resources needed to meet the enormous number of patients. 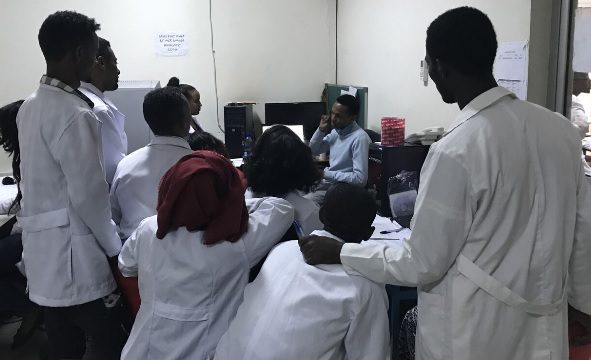 Black Lion technologists during a teaching session with Issack Boru, RT, in 2017.

At Black Lion Hospital, ultrasound is the primary means of diagnosis and is performed entirely by residents. Typical adult studies include evaluation for metastatic work-up, liver masses, cervical masses, obstructive uropathy and lymphoma. Typical pediatric cases include evaluation of abdominal masses, intussusception and genitourinary anomalies, as well as neonatal head ultrasound. Echocardiography is also a common part of the practice, most often used for the evaluation of chronic rheumatic heart disease, hypertensive and ischemic heart disease. 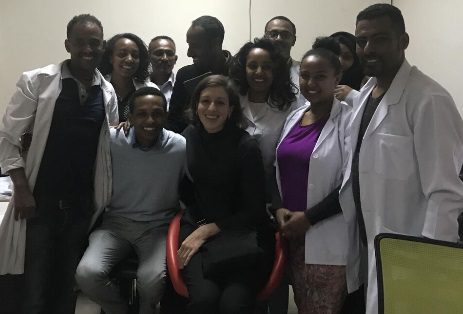 Under the leadership of Director, Dr. Susan Sotardi, RAD-AID partners with two institutions, Black Lion Hospital and St. Paul’s Hospital, both located in Addis Ababa, Ethiopia. The involvement of RAD-AID in Ethiopia focuses on three aspects of development: teaching of radiologists and technologists, informatics (installment and maintenance of PACS) and equipment procurement. Every year since RAD-AID officially launched its exchange program in Ethiopia in 2015, teams of radiologists, technologists, and informatics specialists have traveled to Addis Ababa to deliver essential MRI, CT, ultrasound, and radiography training to residents and staff. In early 2018, RAD-AID successfully implemented a picture archiving and communication system (PACS) at Black Lion Hospital, which was generously donated by MedWeb; RAD-AID will be further assisting in workflow optimization and integration over the next year, with the support of SIIM.

Education of the radiologists and technologists is one of the top priorities for RAD-AID Ethiopia. Currently, Dr. Sotardi and a team of dedicated technologists, led by RAD-AID Ethiopia team member, Bart Pierce, are developing an advanced imaging curriculum for technologists at Black Lion Hospital and St. Paul’s Hospital that will be delivered as a lecture series both by lecturers in Addis, as well as remotely by webinar. Additionally, RAD-AID works closely to coordinate teaching efforts with several institutions who also have a long-standing presence in Ethiopia, including Children’s Hospital of Philadelphia, Emory University, Massachusetts General Hospital, NYP/Weill Cornell Medical Center, University of Toronto and Kansas University.